Radric Barnes, a straight B student. Born in Germany, having a hard and poor life. Abused by his Nazi-Related father. His grandfather was a nazi, but Radric always disliked Nazis. He now goes to St. Lester, leading a reasonable and organized clique, called the Tyrants. He holds his title for the best fighter, until then he is the best fighter of the Misfits. He mainly hangs with fellow Tyrants, or hes chilling with his other friends. Radric dislikes drugs. He always despises the ones who do it. He owns a F-150 back in New Mexico. He also has a nice two story house, near the desert. 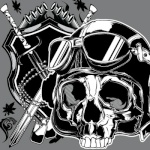