GIRL FROM DA' HOOD.Tamara is a ghetto girl, thick and thin.
Mama' and Papa' tell her dat' she gotta' watch her mouth. She says dis' is how dey' talk in da' south.
From the age of seven she began to hang with the gangs, the wrong gangs, she took a very bad turning from there. Her parents were so rich, stuck up and controlive they couldn't stand Tamara doing this. In the end Tamara was sent away to St Kingsleys School, where they had hoped it would change her from the fiesty, shameless and fearless girl she was. At the moment, there has be no success. 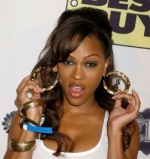